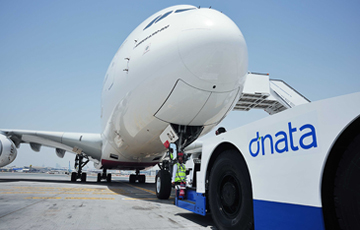 Dnata has recorded 25 per cent growth in its UK cargo handling business this year, despite continuing softness in both inbound and outbound markets.
The increase is thanks to existing clients’ improved volumes as well as “tremendous success” in picking up 14 new contracts over the last 18 months on the back of an £8 million investment in new and expanded facilities, according to Ross Marino, senior VP, international airport operations.
Dnata is operating out of five new UK stations, Birmingham, East Midlands, Glasgow, Newcastle and London Gatwick, as well as relocating to larger refurbished facilities at Manchester.
Three new warehouses have also been added this year at the company’s London Heathrow hub. Qatar Airways has a dedicated facility there, while Dnata’s owner, Emirates, and Qantas have also located at the complex now known as Dnata City.
Challenged by IATA’s declared aim of slicing 48 hours off the door-to-door air freight supply chain, handlers are streamlining their processes. Dnata is no exception.
“The service level agreement always specifies the time by which bellyhold and freighter cargo must be available. In some of our locations, such as the UK and Australia, we can reduce this to 24 hours or less,” Marino says.
“The underpinning IT is crucial. We’ve moved away from the idea of a trucker going to a reception area to pick up and drop off documents, then wait to be allocated a door. “As you drive into Dnata City now, everything is controlled at the gatehouse – it’s paperless and you’re directed straight to the truck dock. We will be looking to roll this out where possible across the UK.”
In Australia, the company is going one step further to ensure its facilities are genuinely acting as a transit point. “We’re saying to the forwarder, we’ll deliver to you, let’s move the goods to your facility,” Marino says.
“We can control the process, even sometimes load in the customer’s warehouse so as not to congest the landside docks. It can be a cost saving for both parties and the market is receptive.”