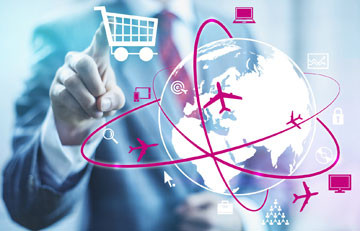 A switch away from the airline industry’s historic Cargo-IMP messaging to modern XML standards could lead to an upsurge in e-air waybills (AWBs) and even finally see off paper documents, predicts Kevin Jones, airfreight director of UK-based forwarder TransGlobal.
TransGlobal has been told by IAG Cargo, the freight arm of British Airways and Iberia, that it is the first UK agent to send live FWB (AWB data) messages using the new IATA Cargo XML standards.
This, Jones says, is a major step forward for paperless master and house AWBs. He hopes to go live with XML e-AWBs to IAG at the end of March and could stop sending paper AWBs to the carrier at that point.
Jones was until recently chairman of the Air Policy Committee at the British International Freight Association (BIFA) and worked closely with Des Vertannes, the then head of cargo at the International Air Transport Association.
The main advantage of XML-based AWBs is that producing them is much less exacting and they are far easier to alter than Cargo-IMP-based ones. “With Cargo-Imp, if you get a zipcode wrong, you need a specialist to sort it out,” Jones explains.
“XML is a much easier language to work with. My IT manager is quite elated – it means that he can work on the messaging himself.” A move to XML would also bypass the problem of the many different versions of Cargo-IMP currently in the industry
TransGlobal has been testing the messages with IAG on a host to host basis. The latter means connecting directly to the airline system rather than going through a ‘switching’ service like BT’s CCS-UK, widely used in the air cargo industry, alongside Descartes or Traxon. This is because CCS has not yet devised its own XML standards, but it is working on it and they will be available later this year, Jones believes.
But meanwhile, TransGlobal would investigate setting up host to host XML communication with other major carriers.
Sending XML messages host to host could thus be an interim stage in the move to e-AWBs, he says: “It requires a little more effort to set up, whereas if we could connect to CCS, we would just have to do it once.” CCS would then take care of communicating with the airlines.
While the end of the paper AWB is probably still some years off – IATA currently puts the percentage of eAWBs at around 22 per cent on feasible trade lanes – the move to XML standards will give the process a huge boost, especially as IAG Cargo is keen to encourage other agents to switch.
Did you find this article of interest, if so why not register for a FREE digital subscription to Air Cargo News? – Find out more