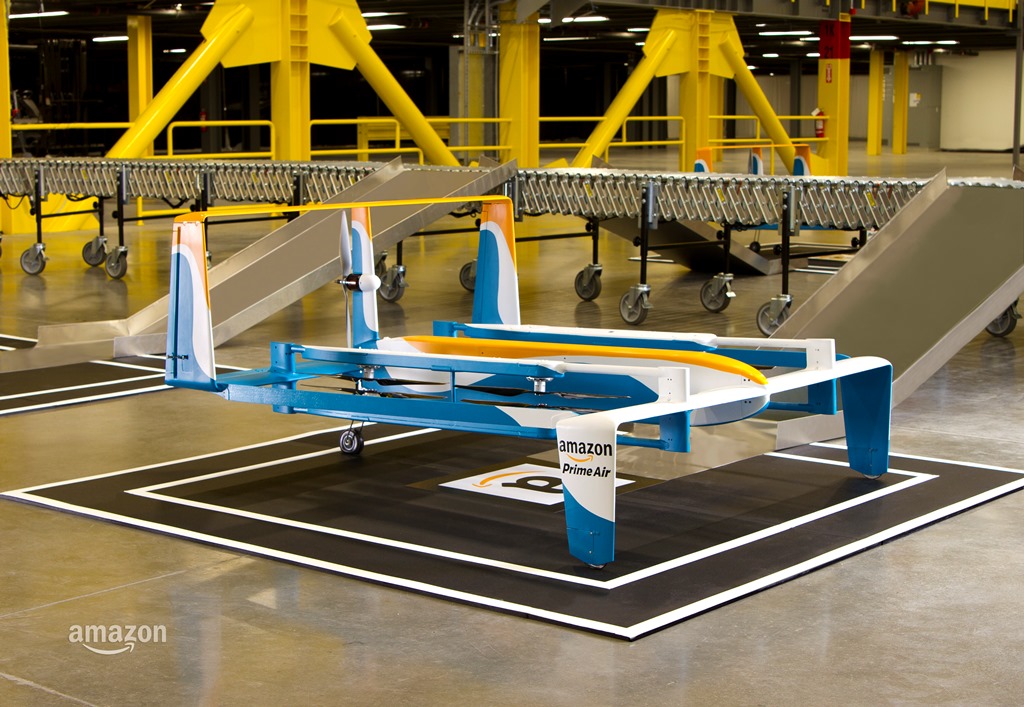 The possibility of parcel delivery by drone continues to take steps forward as Amazon reveals video footage (see below) of one of its Prime Air machines in action shortly after gaining US regulatory approval for testing and Matternet continues to push for regulatory development.
Last week the US Federal Aviation Administration (FAA) issued Amazon with an experimental airworthiness certificate for unmanned aircraft (UAS), which basically allows the online retailer to conduct flight operations at 400 feet or below during daylight hours in visual meteorological conditions.
“The UAS must always remain within visual line-of-sight of the pilot and observer,” the FAA said. “The pilot actually flying the aircraft must have at least a private pilot’s certificate and current medical certification.”
The company must report to the FAA the number of flights conducted, pilot duty time per flight, unusual hardware or software malfunctions, any deviations from air traffic controllers’ instructions, and any unintended loss of communication links.
Days after being issued with the certificate, Amazon revealed new footage of one of its drones in action in a video featuring Jeremy Clarkson, a bulldog named Stewart and one of its delivery drones.

Amazon said Prime Air was designed to safely get packages to customers in 30 minutes or less and can fly for 15 miles.
It also has ‘sense and avoid’ technology to avoid obstacles on the ground and in the air.
“Prime Air has great potential to enhance the services we already provide to millions of customers by providing rapid parcel delivery that will also increase the overall safety and efficiency of the transportation system," it said.
“Putting Prime Air into service will take some time, but we will deploy when we have the regulatory support needed to realise our vision.”
It is not just Amazon that is pushing ahead with developing drone technology for deliveries, and the technology could present opportunities for air cargo companies.
Speaking a couple of weeks after being unveiled as Matternet’s latest recruit, industry stalwart Oliver Evans met Air Cargo News in London ahead of meetings with regulators to discuss the potential use of drones for business-to-business deliveries.
As well as meeting authorities in the UK and Switzerland, where it carried out drone trials earlier this year, the company is also meeting regulators in the US and Germany.
It is also holding discussions with a potential logistics company customer, although Evans could not reveal names at this stage.
Evans, who in his new role will act as a bridge between the technology company and the aviation industry, said it is only a matter of time before business-to-business drone deliveries become a reality. He added that the development presented opportunities for air cargo companies as well as parcel delivery firms.
In his former senior role at Swiss WorldCargo he played a key role in forming a partnership with Matternet and Swiss Post as he believed that drone deliveries would allow the airline to differentiate its offering.
“When you think about fulfilling the expectations of the end user, the buyer, and the shipper, you look at how efficient you can make the entire end to end transportation and this is where the partnership between Matternet, Swiss Post, and Swiss WorldCargo come into the picture.
“We realised that if we can find the most effective way to bring goods to their destination then it opens up a whole new world of opportunity for Swiss WorldCargo and commercial advantage.”
He added that there were significant advantages for companies using drones for deliveries, including less chance of disruption due to traffic congestion, a lower environmental impact and a ten-fold reduction in the cost of delivery.
While Evans is confident about the future of drones as a delivery tool, an analysis by real estate firm Colliers International concluded that the complication of airspace regulation, safety concerns, privacy concerns and noise pollution would push retailers to use existing delivery techniques such as in-store collection, collection lockers and taxis.
But Evans said there are three stages drone technology needed to go through before gaining acceptance.
Firstly, the technology needed to be developed, secondly the right regulations needed to be in place and thirdly there needed to be public acceptance.
Evans said that the technology now existed, although there would be rapid improvements in range and payload weight, with current limits around 15km and one kilo.
With regards to regulation, he said he hoped live trials due to take place in the first quarter of next year in Switzerland and the regulations being developed by the country would act as a guide for others.
Public acceptance would be more gradual process, he said. Initially, Matternet would concentrate on the business to business logistics market and in particular healthcare, where the technology could be used to save lives by getting to hard to reach locations, and therefore gain acceptance from the public.
With regards to safety concerns, he pointed out that vehicles on the road were themselves dangerous and added that regulation would likely permit the drones to fly on pre-approved approved certified routes only and to be controlled by licensed individuals.
He added that there were no plans to place cameras or surveillance devices on Matternet’s drones.
Evans said he decided to take up the role with Matternet, rather than set up his own consultancy business as he had planned, because he is convinced the company and drones have a bright future and he wanted to be at the frontier of industry development.