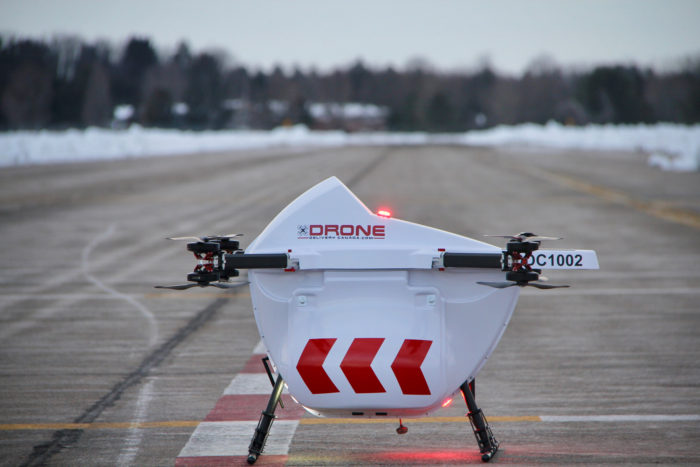 The route will allow DSV to deliver various types of cargo, including healthcare related cargo, from a designated area — known as a DroneSpot — at DSV’s warehouse in Milton, Ontario to a “DropSpot” at Reckitt Benckiser (RB) in Milton, approximately 4 km away.  RB is a global producer of health, hygiene and home products.

The service utilises DDC’s Sparrow drone which has a payload capacity of 4.5 kg and drops the package from a height when it reaches destination.

Michael Zahra, president and chief executive of DDC, said: “We are pleased to announce that the initial implementation of our first contactless, commercial cargo-drop project has been completed successfully. We are excited to bring the benefits of our drone delivery solution to yet another company, RB.

“The route includes transport over Highway 401, one of the busiest highways in the world, adding a unique dimension to this project.  I don’t know that any other commercial delivery drone operator has done this before.”

When the plan for a second route for DSV Canada was first announced, it was expected that the drone would operate from DSV’s Milton site to a location used by multiple customers.

Customers pay DDC a monthly fee for each deployed drone route, pursuant to the terms of their respective agreements.

Siemens Logistics to focus on airfreight automation and digitalisation

SEKO Logistics has streamlined international cross-border e-commerce for more than 10m parcels worldwide each month. The supply chain specialist, which…