UPS the latest to go electric with Tesla order 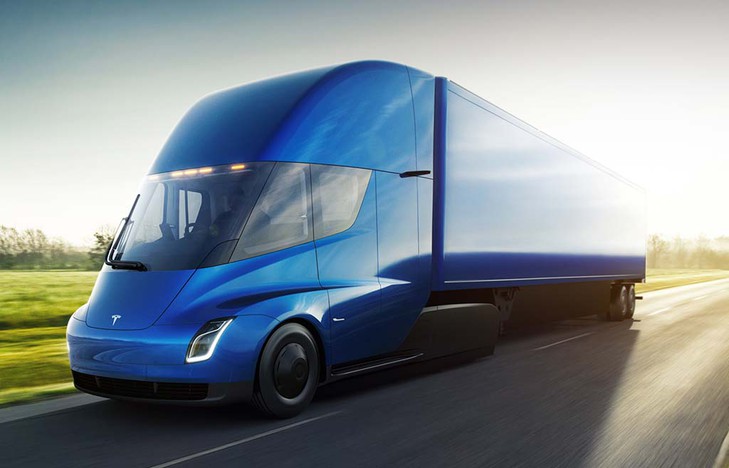 UPS is the latest firm to order electric trucks as it looks to improve safety and reduce its environmental impact.
The US express giant said it had pre-ordered 125 of electric vehicle manufacturer Tesla’s new fully-electric semi trucks – the biggest order for the vehicles so far. The trucks will cost around $200,000 each, reports suggest.
UPS chief information and engineering officer Juan Perez said: “For more than a century, UPS has led the industry in testing and implementing new technologies for more efficient fleet operations.
“We look forward to expanding further our commitment to fleet excellence with Tesla. These groundbreaking electric [trucks] are poised to usher in a new era in improved safety, reduced environmental impact, and reduced cost of ownership.”
Tesla’s Semi truck claims up to 500 miles range on a single charge. Safety features include: automatic emergency braking, adaptive cruise control, automated lane guidance, and brake-by-wire and steer-by-wire with redundancy.
UPS said that Tesla’s driver-assistance features have been found by the US government to reduce crash rates by 40%. Tesla expects to begin production of the vehicles in 2019 and UPS will be among the first companies to put the vehicles into use.
UPS is not the only logistics firm to order electric vehicles. In late November, DHL Supply Chain announced an order for 10 of the Tesla semi trucks.
DHL Supply Chain will test the trucks, which will be available in 2019, at its customer operations in major US metro cities.
The trucks will be used for shuttle deliveries and same-day customer deliveries, and will be tested for mileage efficiency on longer runs from major markets to other DHL operations across the country.
Others to order the Tesla trucks include Pepsi Co, Walmart, JB Hunt Transport Services and Sysco Corp.
But it is not just the Tela electric trucks that are proving popular. Earlier this week, freight forwarder Dachser announced that it would order two of Daimler’s all-electric Fuso eCanter light-duty commercial vehicles for urban deliveries.
The trucks are due for delivery in Spring 2018 and will be used in the Germany cities of Berlin and Stuttgart.
In Berlin and Stuttgart, the two Fuso eCanters will be incorporated into the core groupage business operated by Dachser’s long-established transportation companies.
Their job will be to deliver pallets of manufactured goods, either to micro hubs or directly to customers. They will also collect goods and bring them to Dachser’s branches in Schoenefeld, Berlin and Kornwestheim, Stuttgart.
Depending on its design and purpose, the all-electric light-duty truck offers a range of about 62 miles and a load capacity of up to 3.9 tons. Its electric powertrain comprises six high-voltage lithium-ion batteries.
Rhenus Logistics has also taken delivery of three of the Fuso eCanters, which will be used for operations in Germany from the beginning of January.
The forwarder said that each vehicle is expected to cover around 50,000km a year, will be tested for a period of two years and are expected to enable Rhenus to save up to 137 tonnes of direct CO2 emissions throughout that period.
The aviation industry is also exploring the possibility of powering aircraft using electric. In November, Air Cargo News revealed that Siemens, Rolls Royce and Airbus are to collaborate on a project to deliver a Bae146-sized hybrid electric plane by 2020.
The three manufacturers claim that the E-Fan-X could radically change the face of aviation with cleaner, quieter planes that would allow planes to fly closer to city centres and compete with rail transport for more journeys.
Read more express industry news