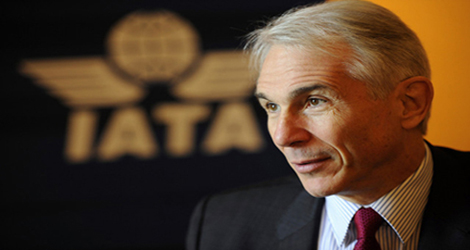 A SLOWDOWN in global trade growth and shifts in the freight commodity mix contributed to the 1.5 per cent fall in airfreight in 2012, says IATA.
“The industry suffered a one-two punch,” declares Tony Tyler, IATA’s director general and chief executive officer (CEO). “World trade declined sharply and the goods that were traded shifted towards bulk commodities more suited for sea shipping.”
As a result, cargo capacity grew just 0.2 per cent over the year and the load factor was 45.2 per cent.
Only the African and Middle Eastern carriers – the beneficiaries of fresh trade lanes and developing trade links between the two regions – fared well.
“The outstanding bright spot was the development of trade between Asia and Africa which supported strong growth for airlines based in the Middle East and Africa,” Tyler confirms.
Freight demand grew 7.1 per cent and 14.7 per cent respectively, both improvements on 2011, when the Middle East expanded 8.2 per cent and Africa declined by 2.1 per cent, the body reveals.
The Middle East had the fastest capacity expansion at 11.4 per cent but the load factor still rose to 44.8 per cent.
Meanwhile, Africa’s freight capacity grew 9.2 per cent, surpassing demand.  The continent’s freight load factor dived to just 24.7 per cent –  “the lowest of any region by a significant margin”.
The CEO notes a number of challenges ahead, including sky-rocketing fuel prices and a GDP growth projection of 2.3 per cent. Although he does state improved business confidence should help cargo markets to recover the lost ground from 2012.
“We are entering 2013 with some guarded optimism. Business confidence is up, the Eurozone situation is more stable than it was a year ago and the US avoided the fiscal cliff,” Tyler forecasts.
Share this story