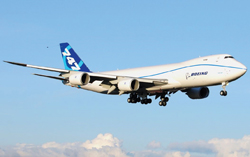 AIRFREIGHT in 2013 will show aggregate gains for the year of no more than two per cent, according to a USA forwarding business.
Julian Keeling, chief executive officer (CEO) of Consolidators International Inc, based in Los Angeles, believes growth in the industry will be hampered by several crucial fundamentals.
These include aircraft overcapacity, frugal shippers opting for slow steaming or super slow steaming in order to take advantage of cheaper ocean rates, together with a sluggish global economy.
“Because of these negative factors, air cargo volumes will not show a consistent pattern of growth next year,” declares the CEO.
Keeling’s bleak analysis comes after he consulted with shippers, airline cargo executives and forwarders.
He forewarns: “If the US and the global economies sink into the morass of the 2007-2009 recession, even that modest growth will vanish like a summer breeze.”
The veteran forwarder’s outlook also contrasts with Boeing’s forecast for the next 20 years, which estimates airfreight will increase by five per cent annually.

Atlas Air and ANA to code share on the transpacific

Atlas Air and All Nippon Airways (ANA) will launch a code share partnership on flights across the transpacific in October….

Nippon Cargo and ASL partner on B747 freighters

Nippon Cargo Airlines (NCA) and ASL Airlines Belgium have added a new partnership covering B747-400 freighters. The tie-up will see…

The freight forwarding market is expected to improve in the rest of this year but the overall picture “remains bleak”,…