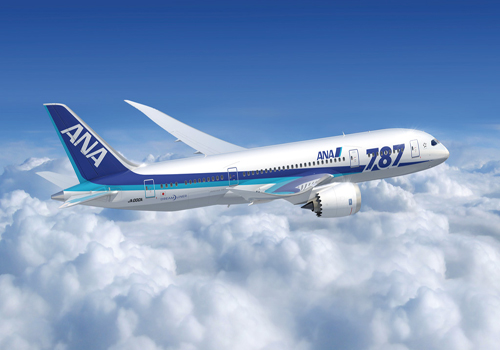 ALL Nippon Airways (ANA) and Japan Airlines (JAL) – the two largest single operators of Boeing’s 787 Dreamliner – have grounded their fleets of 787s after one was forced to make an emergency landing due to a battery leaking.
This latest incident involved one of ANA’s 17 Dreamliners. Flight NH692 from Yamaguchi Ube-Haneda landed at Takamatsu Airport (Japan) only 47 minutes after it took off on 16 January.
An ANA spokesperson reveals: “The event was registered as a serious incident by the Japanese Ministry of Land, Infrastructure and Transport.
“ANA will further cooperate fully with Japan Transport Safety Board (JTSB) and the relevant authorities to investigate the cause.”
The aircraft’s indicators revealed there was a battery-related issue at 30,000 feet. It was later confirmed the electrolysis solution had leaked from the main battery situated in the forward electronic equipment bay.
“There was also an unusual smell in the cockpit as well as in the cabin,” adds the spokesperson.
Of the 129 passengers on board, two suffered minor abrasions and a third experienced slight discomfort in the lower back from alighting from the Dreamliner via the emergency slide.
Meanwhile, a JAL spokesperson states: “In view of the incident encountered by another airline involving the aircraft, we have decided to cancel the operations of our 787-8 scheduled for flights today and tomorrow, January 17, 2013, to ensure complete safety.
“Operations of 787s from 18 January will be decided after further assessment of the situation with the investigations.”
The spokesperson also apologised for any “inconvenience and concern caused to customers”.
The USA Federal Aviation Administration (FAA) and the planemaker are currently conducting a joint probe into the 787 model following several widely reported incidents, including an onboard fire caused by a battery overheating on 7 January.
“Boeing is aware of the diversion of a 787 operated by ANA to Takamatsu in western Japan,” a statement reads.  “We will be working with our customer and the appropriate regulatory agencies.”
Share this story