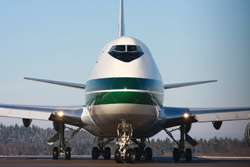 ASIAN carriers’ 5.5 per cent fall in cargo volumes in August clearly reflects how stagnant market conditions are.
Airfreight dropped 0.8 per cent compared with the same period in 2011, IATA’s global traffic results show.
The body noted the stability seen in cargo markets during this year could be “under threat” owing to continued economic fragility. However, Middle Eastern, African and North American airlines had something to smile about enjoying positive growth – 11.3 per cent, 10.2 per cent and 2.0 per cent, respectively.
“Sluggish growth in the USA, the continuing sovereign debt crisis in Europe and concerns over the slowdown in the Chinese economy are taking their toll on both business and consumer confidence,” states Tony Tyler, IATA’s director general.
Share this story