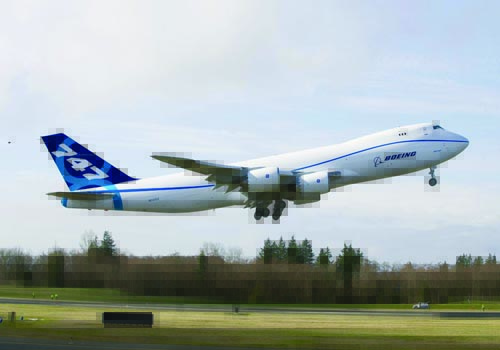 ATLAS AIR have taken steps to reassure the public over the safety of their aircraft following fears over GE manufactured engines.
The statement from the company follows an aborted takeoff, which left an AirBridgeCargo 747-800 freighter spewing engine fragments.
The failed engine is the same type used by Atlas, which has five 747-800s in service and expect to receive five more from Boeing.
Bosses at Atlas stressed their – “deep commitment to and a track record of safety, compliance and security” and pledged on going cooperation with GE and safety authorities.
In a statement they say: “Reflecting our commitment and track record, we have worked closely and continually with General Electric regarding the GEnx-2B engines serving our new Boeing 747-8 Freighters.
“To date, the inspections have not uncovered any issues with our engines and have not resulted in any loss of flying time by our 747-8 Freighters.
“We have also worked with GE to establish a plan to re-inspect each of our GEnx-2B engines at appropriate intervals.
“Future periodic inspections of our GEnx engines are planned to be carried out during regularly scheduled maintenance checks on our 747-8 aircraft.
“As a result, we do not expect re-inspections of our GEnx engines to disrupt our ability to continue to provide safe, value-added 747-8F service to our customers.”
In July, another GE manufactured engine on a 787 Dreamliner failed during a taxi test at Charleston International Airport in South Carolina.
Other major 747-8 Freighter customers including Cargolux said they were following the US National Transport Safety Board’s recommendations on the engine. Cargolux said they had found no fault in their fleet.
The NTSB has issued two urgent safety recommendations to the Federal Aviation Administration (FAA) regarding two recent incidents in which "the fan midshaft on General Electric GEnx-1B engines fractured or exhibited crack indications; and a GEnx -2B incident that appears similar in nature".
The recommendations are: "Issue an airworthiness directive to require, before further flight, the immediate ultrasonic inspection of the fan midshaft in all GEnx-1B and -2B engines that have not undergone inspection.
"Require repetitive inspections of the fan midshaft at a sufficiently short interval that would permit multiple inspections and detection of a crack before it could reach critical length and the fan midshaft fractures."
Share this story