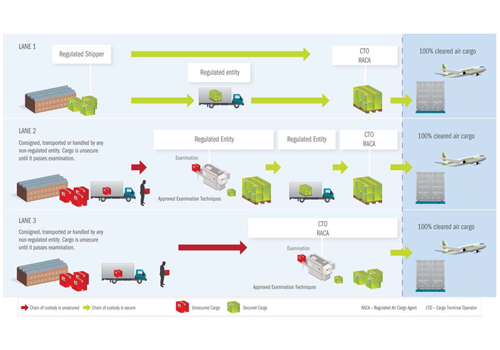 AUSTRALIA’S forwarders are claiming that government plans to construct a new all-embracing air cargo security regime in the country are greatly flawed.
They believe the proposed scheme will increase the costs of Australian exports, possibly to the point where the consignee looks to buy elsewhere, or at least make Australia a less competitive country to trade with.
“It will slow down the movement of exports by air, which will have a detrimental effect on export sales,” warns Paul Golland, chairman of the Australian Federation of International Forwarders (AFIF).
The Australian government wants to institute a nationwide, strict air cargo security regime which, within a year, will effectively licence all suppliers in the air cargo supply chain.
The initiative is aimed at involving all those people or organisations “who produce, move or uplift goods on an aircraft”, says a government statement.
But it will seriously affect the ability of forwarders to conduct their business, and may result in some closing down, AFIF warns.
“The proposed regime represents an impediment to business, both those engaged in air cargo security and those businesses seeking to export cargo by air,” the forwarders’ federation advises.
“The additional time and expense required to export air cargo will jeopardise supply chains and key export markets, such as the high value agricultural export sector,” it adds.
The country’s Department of Infrastructure and Transport has been working with business and international partners to address potential air cargo security weaknesses.
It wants to extend ‘security obligations’ throughout the whole of the Australian air cargo supply chain – from the point of packing, to the point of uplift on an aircraft.
A full report will appear in the May 20 2013 edition of Air Cargo News Issue 752
Share this story