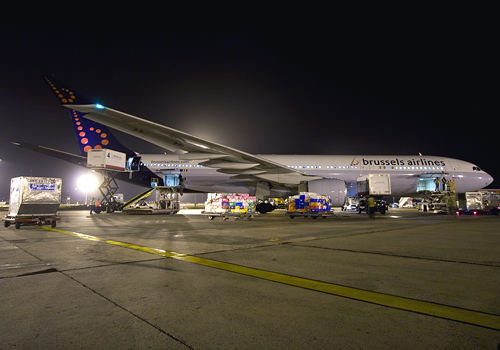 AFRICA plays a rather crucial part in the fortunes of Brussels Airlines’ (SN) freight strategy with more than 80 per cent of its cargo capacity concentrated on the emerging market.
The Belgian carrier, partly owned by Lufthansa Cargo since December 2009, has a vested interest in identifying different ways to capitalise on its current business stratagem.
In this context, a tactical decision to introduce Airbus A330-200s on its African routes last year has borne fruit.
The company handled an estimated total of 39,728 tonnes of cargo and mail during 2012 – representing an increase of 12,592 tonnes compared with the previous year.
“The tonnage increase is mainly due to the launch of our New York JFK (USA) flights, which began last June, and the introduction of two A330-200s into our fleet,” confirms Herman Hoornaert, Brussels Airlines head of cargo.
“The A330-200 is ideal for serving the northbound production ex East Africa, such as Nairobi (Kenya) and Entebbe (Uganda). Despite full passenger loads, these aircraft still offer a payload of at least 15 tonnes.”
He continues: “On the same route, the A330-300s don’t offer any major cargo and mail payload when fully booked with passengers.”
Read more in the next edition of Air Cargo News (25 February – issue 746)
Share this story