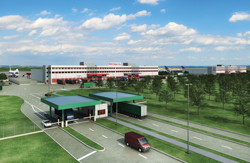 BUSINESS is booming at Budapest Liszt Ferenc International Airport despite plans for a freight centre being shelved after the collapse of Hungary’s flag carrier Malév.
Christa Soltau, the airport’s vice-president of cargo and logistics, describes the impact of the airline’s demise on cargo traffic as “marginal”.
The fact that carriers could face up to a 30 per cent jump in landing fees in 2013, following a recent land-tax increase levied by the government, has not stopped them investing in the airport.
In July this year, Qatar Airways Cargo launched a twice-weekly A330 freighter service between Doha (Qatar) and Budapest.
Meanwhile, Turkish Cargo is increasing the frequency of its A310 route from Istanbul (Turkey) and Cargolux remains a key cargo operator at the airport.
Share this story