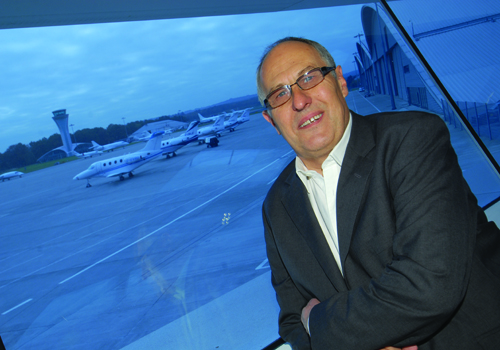 THERE is photographic evidence, which would scupper Chris Leach’s reputation in air cargo.
Luckily for all the young trainees and students he has taken under his wing into the industry in the past 42 years the picture is lost.
The incriminating black and white shot is of a young Chris underneath a Hercules nose wheel suspended six feet from the ground surrounded by the make-do off loading team he had recruited from around airstrip.
Leach had failed to prop up the rear ramp and the whole aircraft had reared alarming into the air.
In fact it was the future Air Charter Service (ACS) chairman’s first load he recalls: “I was only a student – there were three firefighters, a journalist, his son and me.
“I hadn’t been told about the milk stool and the whole plane lifted into the air as we dragged the oil rig part out with the fire engine.
“Before we pushed it back in the journalist got us all to pose under the nose wheel as if we were holding the plane up.
“Later when I realised about the photograph I thought it would be my last day but nothing happened.”
Since that dramatic first day in cargo Leach has gone onto have a multi faceted career in aviation including founding ACS in 1990 from the basement of his home.
Using his contacts in the industry, who were all apparently unaware of the incident unloading a Hercules, he quickly won several contracts including the UN.
ACS now handles US$265m sales.
Larry Coyne of Coyne Airways says he first knew Leach as a competitor, fellow QPR fan and now as a friend.
“At that time we competed frequently for the same business, which he invariably won,” recalls Coyne.
“I think that’s what convinced me to change from charter broking to being a carrier. That way, I didn’t have to compete with Chris.
“Since then we have been good friends.”
TIACA secretary general Daniel Fernandez says Leach is not only a successful businessman who “gives unselfishly of his time and energy” to TIACA.
Fernandez adds: “Chris is direct but also a real people person with a disarming sense of humour, which he uses to great effect.”
Dick Gilbert of the Baltic Air Charter Association describes a long-standing and good friend who had done so much to educate and support young people in the industry.
“There are so many people in aviation who owe their big break to him,” he adds.
Share this story