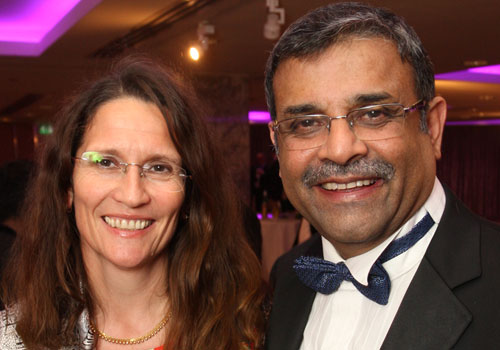 THE AIR was pregnant with a heady cocktail of thunderous applause, delight and expectation – as Ram Menen rose from his chair on to his feet to accept Emirates SkyCargo’s eighth Air Cargo News Cargo Airline of the Year award.
But as the tall, charismatic figure strode to the stage, a tinge of sadness was palpable among the industry’s suited and booted stalwarts at the dining tables at the Lancaster London Hotel, writes Thelma Etim.
The melancholy, visible on some of their faces, reflected their huge affection for one of the most oft-quoted men in air cargo.
After nearly 40 years working in the aviation sector, Menen has managed to achieve the nigh impossible – by being both admired and liked not just by his peers and rivals, but also by the trade journalists who over the years have beaten a path to his Dubai door every time the industry so much as sneezed. His disarming modesty, which becomes apparent in the way he quickly distances himself from any eulogising about his accomplishments, is all the more endearing.
“I think one of the strangest things to happen to me is the fact that they asked me to set up the airline’s cargo division,” he chortles, modestly. “Over the years, I’ve been able to meet tremendous people and make tremendous friendships – relationships will always be important despite how ‘clinical’ the industry may become in the future. It has just been an amazing ride. I was able to be there at the start of Emirates Airline and then able to get involved in founding associations, such as TIACA, and participate actively in the industry itself. These are the blessings one very rarely gets, I have absolutely no regrets.”
When I asked him about air cargo’s strengths and weaknesses, he did not disappoint. “Mistakes are good because you learn from them and it helps with fine-tuning everything but, everybody knows that e-Freight adds efficiency, and yet you still find lots of pockets of resistance. We were also late in getting better market access rights – that is separating out the bi-laterals of cargo and passenger that are currently clubbed together. We should have started that earlier on.”
Menen also stresses the dialogue between ocean and airfreight must be improved, along with communication within and outside the industry. “It is one area we need to work on,” he argues. “As a common voice, we have not been very successful until now, but with the creation of entities like GACAG we are coming together. We should also be talking to Joe Bloggs who does not have an understanding of how air cargo affects his daily life – and that will get the politicians to start supporting us. A political mind is required to tear the barriers down.”
After the last turbulent two years, Menen’s approach to managing commercial uncertainty is unsurprisingly positive. “We’re going through a very evolutionary time, so don’t try to shape the future with what has happened in the past,” he advises. “Today is very important, because if you don’t survive today you won’t be here tomorrow. The old rules don’t apply and new rules are not written. You first try to understand the new norm – and then try to write the new rules.”
Share this story