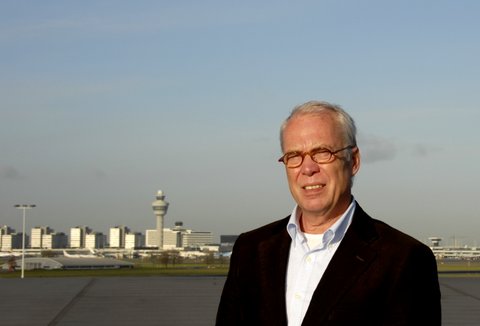 TON Smulders thinks of himself as the silver fox of air cargo.
An old head in a new industry Smulders started working in airfreight aged 25 at a time when the industry was very different.
He had his first taste of air cargo while working at Holland America Line in 1976 and when they pulled out of aviation he decided to stay with the industry he had built his skills in. Moving to when he represented Iscargo of Iceland who operated a twice-weekly freighter service between Reykjavik and Rotterdam using two where they operated DC6 aircraft.
He comments: “It was a four engine piston aircraft – we used to call them the first three engine DC6 because they always came in with one engine shut down caused by a broken cylinder.
“In those days it was easy to get to the ramp but now with all the security it can take 15 minutes to get to the ramp – it is so much more complicated.
“We used just type up an Air Way Bill but now it is done on a computer, which is much easier however due to so many security measures very time consuming.
“Flying to the US now customs needs all the information on every item must be in the US customs computer before you take off.”
Smulders misses the romance of the old days but he is no technological refusenik.
In his career he has seen the security on air cargo go up in tandem with the role of computers, which he admits has left many of his contemporaries feeling left behind.
Yet while Smulders does recognise the essential role of technology as a seasoned GSA he believes the ‘hands on skills’ still have applications.
For example he recalls one recent instance when he took a young employee round a 747 because the youngster had never seen the aircraft before, despite working loading them via a computer screen for two years.
After that trip he had a better understanding that what is possible on screen and what is possible in reality says Smulders.
He adds: “The old days are gone but it is still important to know what the aircraft looks like and how to maximise the tonnes and volume.
On another occasion he was charged with flying 165 pregnant heifers from Frankfurt Hahn to Yakutsk in Siberia.
He needed all his skills and cargo intuition to take land the payload off the 747 required. It was the first time the aircraft landed at the airport and there was none of the equipment you would need to empty the aircraft like a maindeck high loader.
Smulders only discovered the problems he was going to face after insisting on being sent a picture of the high loader he was initially told Yakutsk possessed.
They eventually got around the problem by building a ramp to boost the critical piece of equipment to the correct height.
“I love the air cargo industry as much as the first day I started,” says Smulders. “For me it is about the challenge and satisfaction of a job well done.”
Smulders is currently MD of Active Airline Representatives.
Share this story