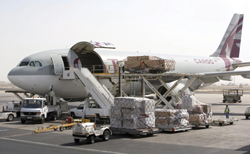 QATAR Airways Cargo’s (QRC) global expansion plan is gathering momentum with the launch of more routes and capacity upgrades in the Middle East.
The state-owned flag carrier, which has already established eight new freighter destinations since the beginning of 2012, says its latest weekly services to Sharjah and Abu Dhabi (UAE) are a response to growing consumer demand.
An Airbus 300-600F will be used to transport goods such as, machinery, high-tech equipment, perishables and luxury consumer items on these routes, according to the airline.
A QRC spokesperson states: “Qatar is strategically positioned to serve as a logistics hub. The cargo handled at Doha International Airport has been consistently increasing each year.
“This capacity will further increase once the airline moves to the New Doha International Airport (NDIA).”  NDIA will be able to handle at least 1.4 million tonnes of cargo annually.
QRC’s network spans 119 international destinations. The cargo division operates a fleet of seven freighters comprising three A300-600Fs and four B777Fs.
The division’s newest freighter destinations include Seoul (South Korea), Johannesburg (South Africa), Muscat (Oman), Budapest (Hungary) and Tripoli (Lebanon).
Share this story