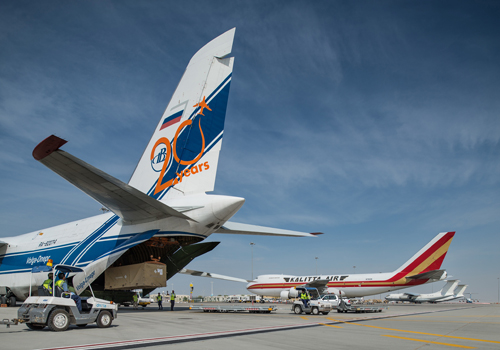 DUBAI World Central (UAE) recorded a 144 per cent hike in freight traffic in 2012, compared with the previous year despite the economic downturn.
The Middle East airport handled 219,092 tonnes of cargo and its aircraft movements totalled 16,317 – a 99 per cent rise from 8,198 in 2011, owners Dubai Airports (DA) reveals.
“Less than three years after its opening Dubai World Central (DWC) is fast emerging as a significant cargo airport in the region,” says Paul Griffiths, DA’s chief executive officer.
“That emergence is set to continue as airlines take advantage of the airport’s facilities, road feeder service to Dubai International and bonded link to the Jebel Ali port.”
Arguably, DWC’s success last year, was largely due to the fact that it has more than 30 carriers on its books  – predominantly as cargo charter operations – and of these, 15 are scheduled services.
DWC and its bigger sister Dubai International is expected to handle three million tonnes of airfreight by 2015, its owners forecast.
Incidentally, Dubai International handled 2,279,624 tonnes of cargo last year.
Share this story