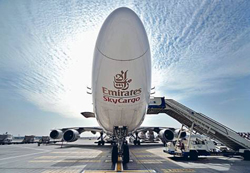 AIRPORT authorities are beefing up security at Thiruvananthapuram International Airport in the state of Kerala (India) following a spate of thefts from locals.
Four boxes – each weighing nearly 50kg – of Emirates Airlines cargo were found outside the perimeter wall on 22 April.
A source told the Times of India that Emirates staff left the cargo unattended in the equipment yard on 19 April because they did not know whether the shipment was courier or standard cargo.
“Freighters land at the domestic terminal,” said the source. “Once the cargo containers are unloaded they are brought to the equipment yard where it is sorted into courier and cargo.
“Couriers are transferred to the international terminal while cargo is sent to the [Kerala State Industrial Enterprises] cargo complex. But the airline had goofed up with the four cartons and they were lying in the equipment yard for two days pending deposit.”
An Emirates official said: “We confirm an incident of cargo being found outside the sterile airport area in Thiruvananthapuram this morning. The incident was reported to the local police and we are co-operating with the investigations.
“Emirates abides by all rules and regulations as outlined in each country to which we operate.”
However, the official then went on to add that while the customs regulations require cargo to be handed from clearance to the custodian of the cargo complex within two hours, “the airlines are biting off more than they can chew and are unable to keep pace with the movement”.