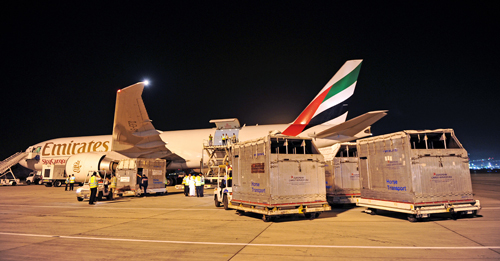 EMIRATES SkyCargo delivers its largest shipment of horses from Muscat (Oman) to the UK.
The major carrier used a 777 freighter aircraft to fly more than 100 of the animals, belonging to the Royal Cavalry of Oman, to Stansted Airport to take part in the Queen’s Diamond Jubilee pageant.
A spokesman revealed the first flight – carrying 70 horses – was the largest number ever transported by Emirates on a single freighter.
The second, containing the remaining 42, touched down two days later.
“With our Dubai (UAE) hub now a major player in the world of horse racing, we have gained considerable experience in the care and transport of horses and fly hundreds across the globe every year,” says Hiran Perera, Emirates’ senior vice-president of cargo planning and freighters.
Gulf-based horse-shipping agent, Equitrans Logistics, handled the transportation of the horses from stable to stable, the spokesman adds.
Share this story