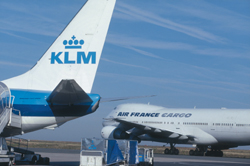 BIG European air carrier Air France-KLM-Martinair Cargo and global forwarding, logistics and shipping giant Bolloré are celebrating more than 20 remarkable years’ of close and successful cooperation.
Despite the global air transport and logistics environment being characterised by permanent change and adaptability over the period, the two companies have remained successful in creating a lasting value-added partnership, both for their joint customers and themselves, says an announcement.
“This cooperation has been constant, even when our two groups were simultaneously implementing in-house consolidation and growth strategies,” says a spokesperson.
The relationship has survived significant air cargo industry changes, as organisations reached out for critical mass in a highly competitive environment.
These developments were marked by frequent mergers in the logistics and transit domains, as well as in air transport.
Bolloré Logistics – made up of SDV, SAGA, BLP, Sogetra, Nord-Sud and Transisud – has become an international global player in 92 countries (excluding Africa) in logistics and freight. It is now leader in France, in the top five in Europe and amongst the top 20 global companies in its field.
Air France achieved critical mass with the merger with Holland’s KLM, then with Martinair, making the AF-KL-MP Cargo group a global air cargo leader.