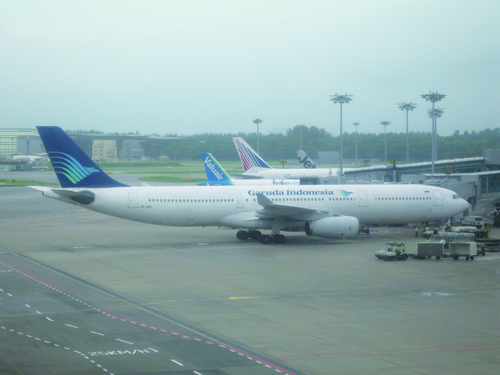 NATIONAL carrier Garuda Indonesia signs a new deal involving cargo operations with China Airlines to improve traffic between the two countries.
The memorandum of understanding recently signed by Garuda Indonesia president, Emirsyah Satar, and China Airline’s president, Huang-Hsiang Sun, in Bali (Indonesia), also includes passenger flight code-sharing and promotional activities.
Garuda is now entitled to a special prorate agreement (SPA) on routes served by Garuda to Taipei (China) and other destinations in Asia, including Japan and the US.
An SPA on cargo will be introduced for the Jakarta (Indonesia) to US and Europe routes using China Airlines aircraft.
The two carriers first began their code-sharing partnership in 1991 for the Jakarta to Taipei and the Denpasar (the capital city of Bali) to Taipei routes.
These flights are available once a day with Airbus A330 aircraft for Jakarta-Taipei and Boeing 747-400 for Denpasar-Taipei flights.
The new deal will later include additional routes, such as flights from the eastern Indonesian city of Surabaya to Hong Kong (China) and Taipei.
Share this story