Germany does well for Emirates 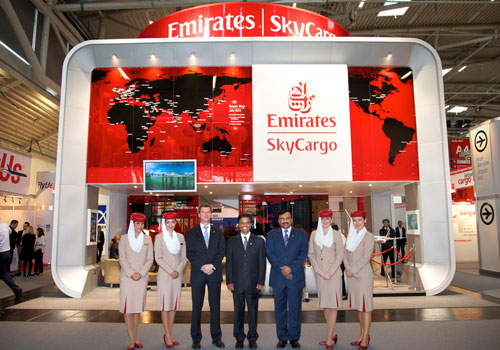 GERMANY has become one of Emirates SkyCargo’s most successful markets in Europe, since its launch in 1987.
In the last 12 months, the UAE-based carrier has transported 80,000 tonnes of machinery, vehicles, chemicals, foodstuffs and textiles from Germany via its Cargo Mega Terminal in Dubai to consumers all around the world, notes Pradeep Kumar, the carrier’s senior vice-president for cargo revenue optimisation and systems.
Emirates SkyCargo offers some 2,500 tonnes of weekly capacity from Frankfurt, Munich, Dusseldorf and Hamburg, including freighter services from Frankfurt and belly-hold cargo capacity from all four gateways.
Emirates links Germany with Dubai, the Middle and Far East, Africa, Asia and Australia nine times a day operating triple-daily scheduled non-stop flights from Frankfurt as well as double daily non-stop services from Düsseldorf, Munich and Hamburg.
The airline currently operates a total of eight weekly Boeing freighter services between Germany and Dubai, of which seven are from Frankfurt and one from Dusseldorf, via Frankfurt.
In addition, the airline operates two weekly cargo-only flights from Frankfurt to Campinas, Såo Paulo (Brazil).
Share this story