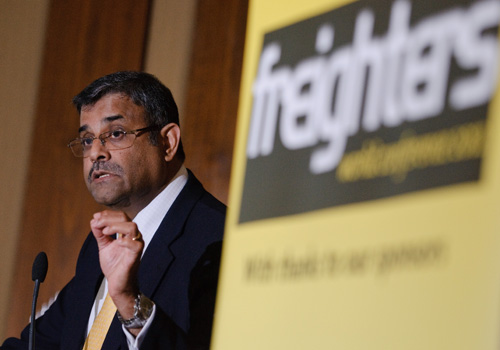 THE AIR cargo industry is becoming increasingly polarised between supply chain members willing to embrace change and the ‘dinosaurs’ who are sleepwalking into potential disaster.
The growing divide was quickly evident during our annual 2012 Freighters World Conference, at Frankfurt in Germany.
Now in its 12th year, publisher Air Cargo Media – owners of Air Cargo News –established the influential business forum as a sounding board for stakeholders.
This year’s event was aimed at addressing the needs of an industry that has been buffeted by a decline in demand, political unrest and exorbitant oil prices coupled with global economic crises.
But whereas some delegates called for a more holistic approach to deal with the pressing issues, ranging from digitisation to the multiple global security regulations on the one hand, others were more Darwinistic, preferring instead to go it alone.
The attendees included Des Vertannes, IATA’s global head of cargo; Ram Menen, divisional senior vice-president of cargo at Emirates SkyCargo; Peter Scholten, commercial vice-president of Saudi Airlines Cargo; industry expert Stan Wraight and Michael Steen, executive vice-president and chief commercial officer of Atlas Air Worldwide.
“We only have ourselves to blame. There is no doubt that our industry is changing forever and we need to change along with it,” warns Steen, who is also the chairman of TIACA.
Discover what else he had to say in the 1 October edition of Air Cargo News.
Share this story