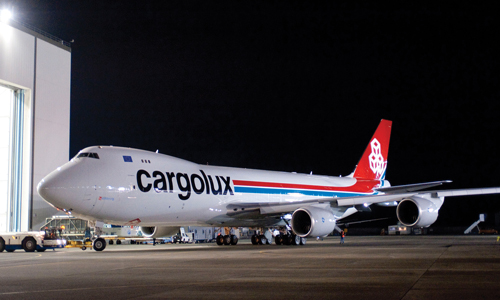 WHILST celebrating its 43rd anniversary, Cargolux has completed another milestone – the acceptance of its 25th B747 freighter from Boeing.
The new aircraft is a B747-8F named City of Vianden."This is a proud moment for Cargolux,” says Richard Forson, interim president and chief executive of the all-cargo carrier.
“Our history and relationship with Boeing is a long and fruitful one. The B747 has become a mainstay of our fleet and a true workhorse.
“Cargolux and Boeing have a lot in common; both companies share the same spirit and always aim to push frontiers. My congratulations and thanks also go to Boeing for making this milestone possible,” he adds.
The B747-8F offers a range of 4,325 nautical miles (8,010 km) and enables operators to choose between carrying greater revenue payload – up to an additional 20 tonnes – or flying up to 1,000 nautical miles (1,850 km) farther in markets where cargo density requirements are lower.
The aircraft benefits from lower tonne-km costs than its predecessor the -400F.
‘We are proud of the enduring relationship Boeing and Cargolux have built together,” says Todd Nelp, vice-president of European sales, at Boeing.
“This milestone delivery is testament to the incredible capabilities of the B747-8F, providing double-digit improvements in fuel burn, lower operating costs and emissions and more revenue-generating cargo volume.”
Cargolux initially introduced the B747F in 1979 when it acquired its first two new -200Fs from Boeing.
The introduction of the -200F, with its increased capacity and unique nose cargo door, enabled Cargolux to gain a foothold in the world cargo market and grow profitably throughout the 1980s.
The carrier became the world’s first operator of the -400F version in 1993. It was then the largest commercial cargo transporter in service, with the lowest tonne-km cost in the industry which provided Cargolux with the ability to carry twice as much cargo, twice as far, and grow into the world’s leading all-cargo airline.
In 2005, Cargolux pioneered another new aircraft type in the air cargo industry when it ordered 13 B747-8Fs. The first delivery joined the Luxembourg launch customer in late 2011, making Cargolux the first operator of the type worldwide and was put directly into service flying to Seattle’s Sea-Tac International Airport where it was loaded with revenue cargo.
Since 2011, the B747-8F has provided Cargolux with 16 per cent lower operating economics and a 30 per cent smaller noise footprint. Cargolux’s eighth B747-8F is due for delivery in May.
Share this story