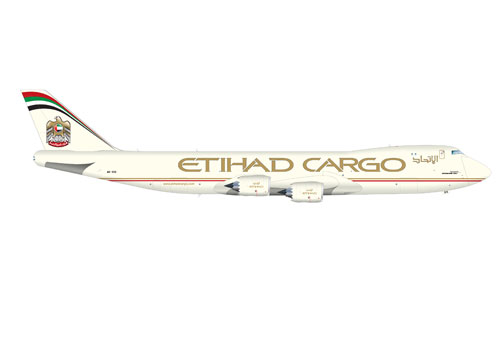 ETIHAD Airways has signed a multi-year aircraft, crew, maintenance and insurance (ACMI) agreement with Atlas Air Worldwide to provide the UAE flag carrier with its first B747-8 Freighter.
The Etihad Cargo liveried B747-8F will enter service with the carrier in June and will be the largest in Etihad’s growing freighter fleet.
It offers a payload of 138 tonnes and a range of more than 8,000 kilometres.
This is the second ACMI agreement between Atlas and Etihad, complementing an existing lease agreement signed for a B47-400F in May 2012.
The delivery will take Etihad Cargo’s freighter fleet to nine aircraft. From June the airline will also operate three B777Fs, one B747-400ERF, one B747-400F and three A330-200Fs.
James Hogan, Etihad Airways’ president and chief executive, says: “Cargo is one of our key strategic pillars and a growing part of the business.  In 2012, it delivered tonnage growth of 19 per cent on the back of a capacity increase of 14 per cent in available tonnage kilometres.
“This deal with Atlas for a B747-8F reinforces our ability to serve a growing number of customers from around the globe,” he adds.
Atlas is the only ACMI provider in the world to offer the B747-8F aircraft.
Share this story