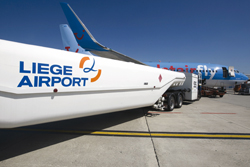 FREIGHT volumes at Liege, Belgium’s largest cargo airport, dropped by 18 per cent in August 2012, compared with the same period last year.
The company says the facility handled 41,996 tonnes of freight during the month.
A spokesperson states: “The published statistics for August continue to show the slow growth of world trade.
“According to IATA, air cargo traffic will remain difficult during the second half of this year as the rising cost of fuel is added to the uncertain global economic outlook.”
Share this story