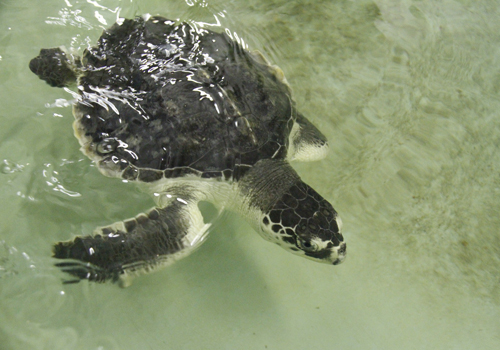 AFTER a monster adventure a tiny rare turtle has been flown back to its native habitat – a year after getting lost.
In December 2011, the rare marine reptile washed ashore in Monster, a village in the Netherlands, capturing the hearts of local media who nicknamed it “Flip”.
The exhausted creature had been swept from the warm waters of the Gulf of Mexico and was badly injured.
Now thanks to the care of vets the intrepid little swimmer was given the OK to be flown back to Houston on a KLM B747 Combi aircraft.
Flip travelled in a custom made crate, meeting the IATA Live Animal Regulations, and the rare female Kemps turtle enjoyed the comforts of the KLM Cargo Animal Hotel at Amsterdam Schiphol Airport.
Vets in Texas are monitoring Flip’s acclimatisation after the flight and expect to make the release into the open ocean this week.
Kemps turtle (Lepidochelys kempii) are the smallest and most endangered marine turtle species.
Share this story

Cargo handler dnata is deploying Descartes’ Bluetooth low energy (BLE) readers to enable the tracking of cargo across its network….