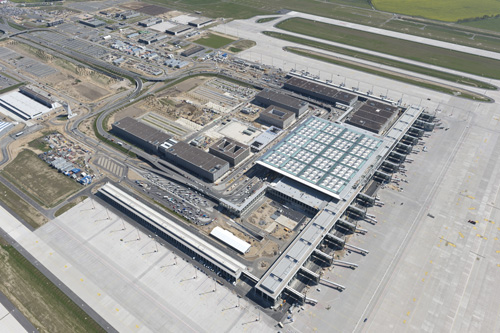 A PROBLEM with the fire safety system at Germany’s newest €2.5bn (US$3.2bn) airport sparks anger from major airlines over its delayed opening and leads to a high-level sacking.
It has emerged Manfred Koertgen, the managing director for technical issues at Berlin Brandenburg Airport (BBA), will leave his role on 1 June.
His surprise removal is thought to be a result of the ‘issues’ with the fire safety infrastructure for the state-of-the-art facility.
This, in turn, has led to BBA’s opening – initially scheduled for 3 June – now being postponed until 8 May 2013.
The move has attracted criticism from carriers Air Berlin, Lufthansa and easyJet – who all plan to expand their services from the airport.
Air Berlin chief executive officer, Hartmut Mehdorn, has reportedly described the situation as “completely unacceptable” and having done “irreparable damage to the image of Berlin as an air traffic hub”.
Although German flagship airline Lufthansa expects to be compensated for the delay, it stated “the stable and safe operation” of the airport was paramount.
The airlines have since revealed they intend to maintain their flight schedules at the city’s other airports, Berlin Tegel and Schoenefeld.
BBA is the country’s third largest airport behind Frankfurt Main and Munich.
Share this story