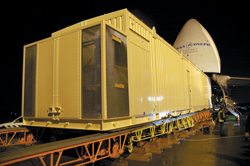 FREIGHT specialist Ruslan International completes its 15-flight programme delivering cargo to the Japanese peace-keeping contingent of the United Nations mission in Sudan.
The company, using an An-124 freighter, flew from Japan to Uganda carrying supplies, which included non-combat vehicles, power generators and communication equipment to the Japan Ground Self Defence Force.
Michael Goodisman, Ruslan’s business development manager, states: “We were very pleased to have the opportunity to play a significant role in this important peacekeeping mission.

“The An-124 once again came into its own because of the variety and bulk of many of the items being moved.”

The UK-based firm manages the combined Antonov An-124 fleets of its shareholders Antonov Airlines and Volga Dnepr Airlines.