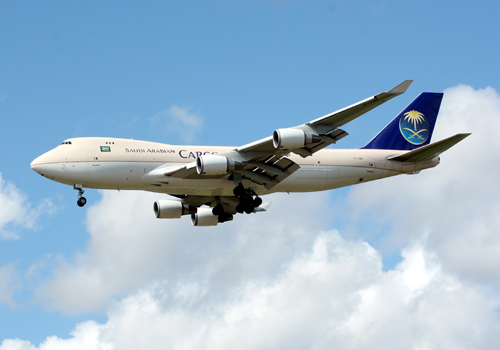 SAUDI Airlines Cargo achieved record results in 2012, posting total figures of 516,000 tonnes, resulting in a 21 per cent increase in revenue over the previous year.
The airline’s success, which is due to a strong economy in the Kingdom (KSA), represents a landmark achievement for the Saudi-based cargo carrier, says Fahad Hammad, chief executive.
“2012 has been our most successful year to date,” he states.
“This is largely due to a very strong fourth quarter.”
Saudi Cargo achieved growth in all of the regions in which it is active. “Our volumes from Europe have increased by 47 per cent and from Greater China/Hong Kong by 21 per cent.
“Likewise, volumes from the UAE have risen by 51 per cent and from Bangladesh by 72 per cent,” he adds.
It was a similar picture for volumes from the network into other markets, with volumes into KSA increasing by 22 per cent and into Africa by 35. Volumes from all regions into Europe rose by 43 per cent.
Saudi Airlines Cargo operates scheduled all-cargo services with 13 freighters and sells belly capacity on 145 passenger aircraft, spanning a rapidly expanding global network of 225 destinations.
The cargo airline also provides worldwide charter flight solutions from a growing fleet of dedicated charter aircraft.
Share this story