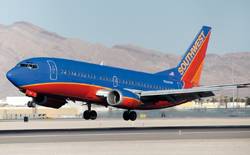 SOUTHWEST Airlines (US) answers the naysayers by more than doubling its profits in the second quarter of 2012.
The low-fare major domestic carrier’s net income was US$228m compared with $161m during the same period in 2011 despite the ‘sluggish’ US economy and exorbitant fuel costs.
“Record revenues driven by steady growth were sufficient to overcome high jet fuel prices and produce a record operating income of $485m and a record net income of $273m both excluding special items," says Southwest’s chief executive officer Gary Kelly, in a statement posted on the company’s website.
"We are producing very strong results despite a fragile economic environment [and] have significant efforts underway to strategically optimise and modernise our fleet.”
He adds: “Given that we don’t plan to grow the fleet until we hit our financial targets, deferring 30 new aircraft deliveries will reduce our 2012 to 2014 capital spending by approximately $1bn.”
The company repaid $469m in debts during first half 2012 and is scheduled to repay approximately $90m in debts for the remainder of the year.
Share this story

IAG Cargo has established a new loyalty programme for its larger freight forwarder customers. The Forward.Platinum programme allows customers with…