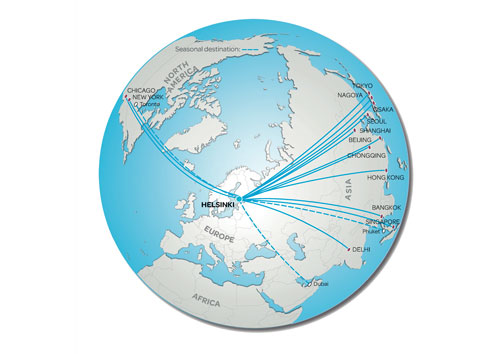 SADLY, for many airfreight customers, there is another type of air cargo shipment, which travels on passenger aircraft that usually receives higher priority treatment than lowly freight.
Much to the chagrin of forwarders and shippers, suitcases get their own priority status on passenger services around the world. And, almost without exception, are mostly given VIP loading treatment.
It’s now big business, especially for those ‘low-cost’ passenger airlines that charge top rates for accepting passenger baggage.
Prices for receiving some suitcases can be up to 10 times more expensive than for comparable belly cargo shipments.
According to numbers generated at Helsinki Airport, the Finnish hub handled more than five million suitcases last year.
The bags were transported overseas and to domestic locations in aircraft holds, often immediately adjacent to their ‘less valuable’ cargo cousins.
The volume of baggage is increasing step-by-step. In 2010, for example, a total of 4.8 million bags were processed at Helsinki Airport.
The baggage handling system of Helsinki Airport is maintained by Finavia, the Finnish airport operator. An 11-kilometre-long baggage line is the backbone of the baggage handling centre with a state-of-the-art technology solution which sorts bags to the correct aircraft in an efficient and quick way, says a statement.
The top speed of bags travelling on the line is seven metres per second, it has been calculated.
It is not known how many of them just vanished into Finnair.
Share this story