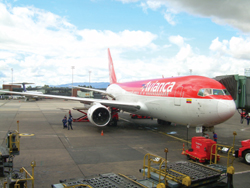 THE Portuguese government has chosen Synergy Aerospace, a Brazilian aviation conglomerate, as the sole bidder in the privatisation of state-owned flag carrier TAP Air Portugal, it is reported.
Synergy is already the majority owner of Avianca Taca Holding, Latin America’s second-largest airline group, after LANTAM.
TAP, the biggest carrier of passengers between Europe and Brazil, will complement Synergy’s Avianca Brazil unit.
TAP was put up for sale as part of Portugal’s fiscal bail-out programme. The Portuguese carrier had attracted initial interest from a number of potential suitors, including International Consolidated Airlines Group (IAG), the parent company of British Airways and Spain’s Iberia.