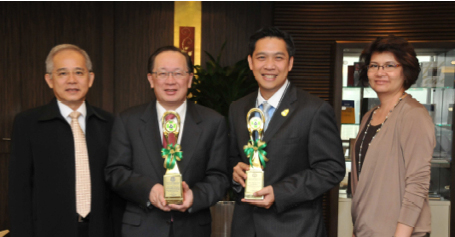 THAI Cargo has picked up a national security award for the fourth year running.
With the recent International Civil Aviation Organisation and World Customs Organisation communiqué set to transform policy, timely congratulations go to Thai Cargo for picking up a fourth consecutive national award.
Receiving the trophy from that nation’s Department of Labour Protection and Welfare were Pichai Chunganuwad and Nirat Maneepun. They collected trophies as Best Security Organisation and Best Security Establishment at a national level for their Suvarnabhumi Airport hub.
The air cargo pair were congratulated by Griangsak Sakruangngam executive vice president of Corporate Secretariat Department and acting executive vice president of Human Resources of Thai Airways and Suvimol Bualerd, vice president of general administration department.
Share this story