The most quoted man in air cargo? 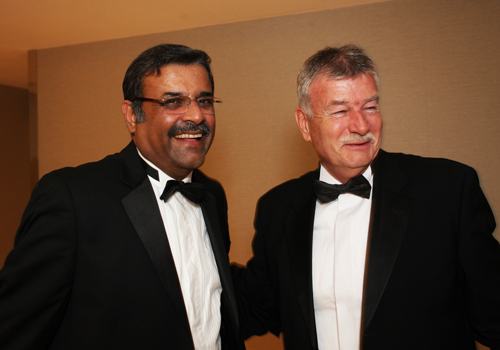 IT WAS those optimistic days of 1983, and two highly significant, future-shaping air cargo events were about to unveil themselves.
One was the launch in the UK of Air Cargo News, with founders Nigel Tomkins and Ray Crane making plans to revolutionise air cargo information services with the distribution of their new, fortnightly newspaper.
The other was the start of a one-aircraft, upstart airline, operating from the UK to the desert runways of the Middle East.
Emirates Airline was being born – and at the head of cargo was the likelable, if a little raw, Ram Menen, former Kuwait Airways cargo sales manager.
I recall a visit to London’s Gatwick Airport one day in early 1983 – I was there to meet up with a fellow rugby-playing pal – when someone quietly pointed out two men with their heads bowed in secret, almost furtive discussion on a seat in a corridor adjacent to the passenger terminal.
One was Ram and the other was Emirates’ founding chief executive officer Maurice Flanagan. “It’ll never work,” my mate whispered of the new airline.
“Who would want to fly to that dry place?” A bit later, Maurice Flanagan admitted to me in an early interview for Air Cargo News: “This is going to be big.”
Well, 30 years on, and with Ram’s considerable help, they certainly got it right. My pal was clearly wrong.
Emirates is now part of the Emirates Group, a dynamic and award-winning travel, tourism and cargo logistics operation with a global reputation for excellence, spanning every aspect of the industry.
Emirates and the air cargo industry will miss Ram when he retires in the summer. We shall miss Ram. He is probably the most quoted air cargo character of the last 30 years. And Air Cargo News has followed him every step of the way…
Share this story